This truly inclusive form of performance, evolved out of the Joining the Fires workshops and Community Sharings. Starting in 2015, with engagements in St. Catharines, Hamilton, and later Brantford, the improvised process for creating stories evolved into what we call Envisioned Scenography. This is a multi-arts approach, involving fabrics to create worlds envisioned by participants and within these worlds, stories and soundscapes emerge. We are grateful for the support of Ontario Trillium Foundation, Canada Council for the Arts, Ontario Arts Council, and Toronto Arts Council, without which this performance form would not have been possible.

Our workshop utilized fabric for participants with CP to expand their imagination, creating new worlds and bringing them to life. 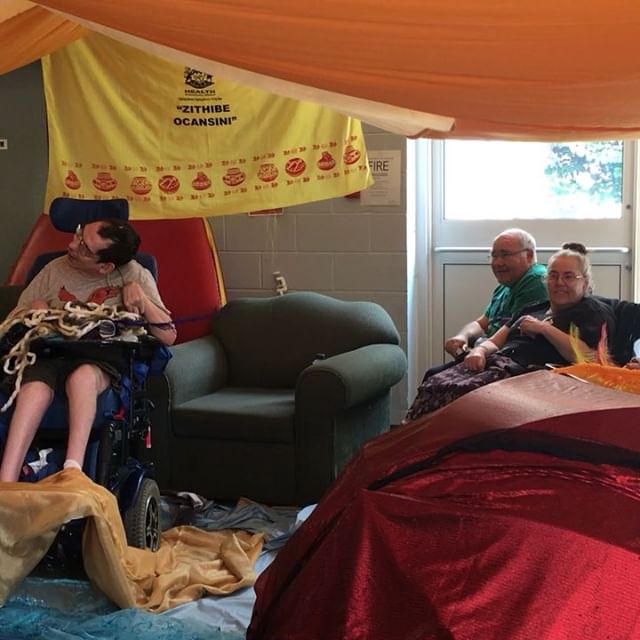 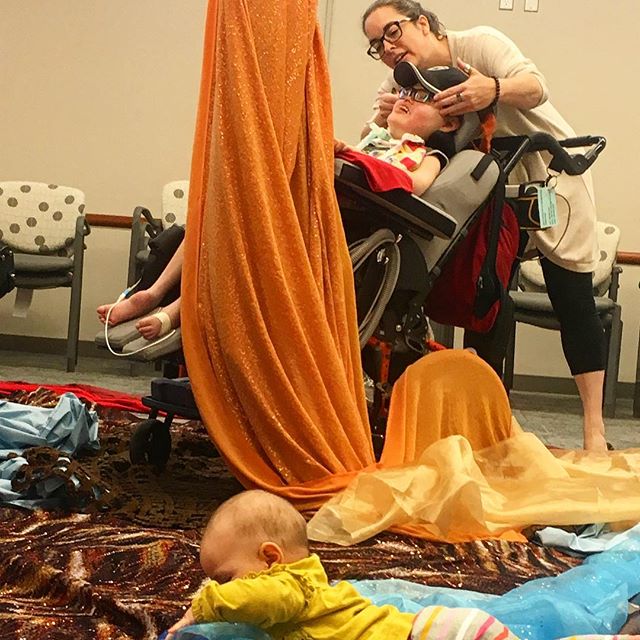 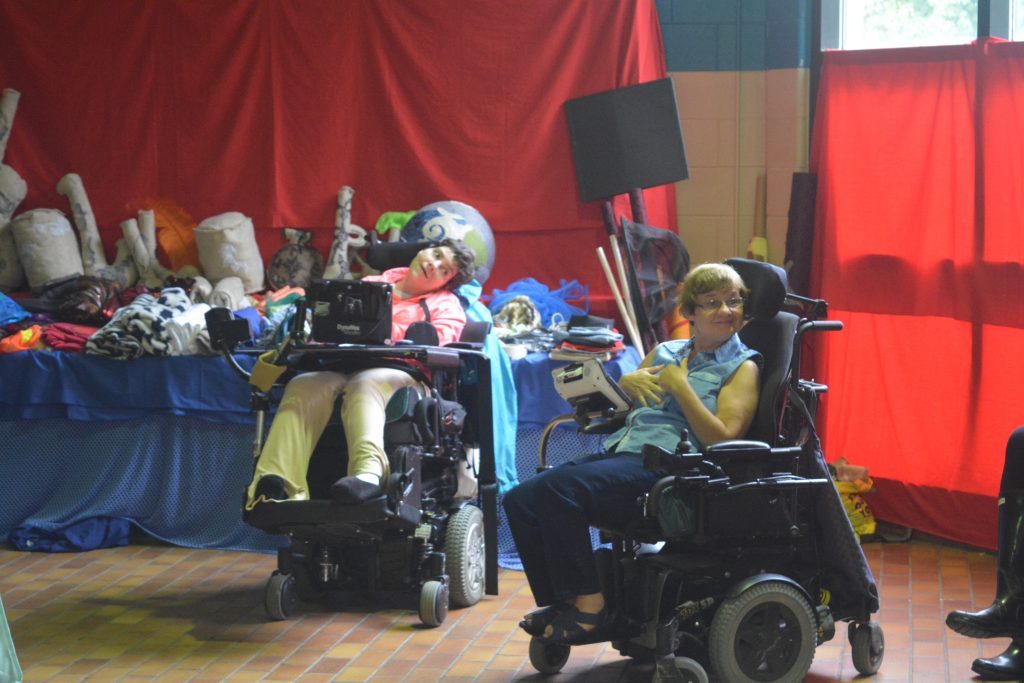 The Workshop at Hamilton works with our emerging Hamilton leadership team to spread the movement. 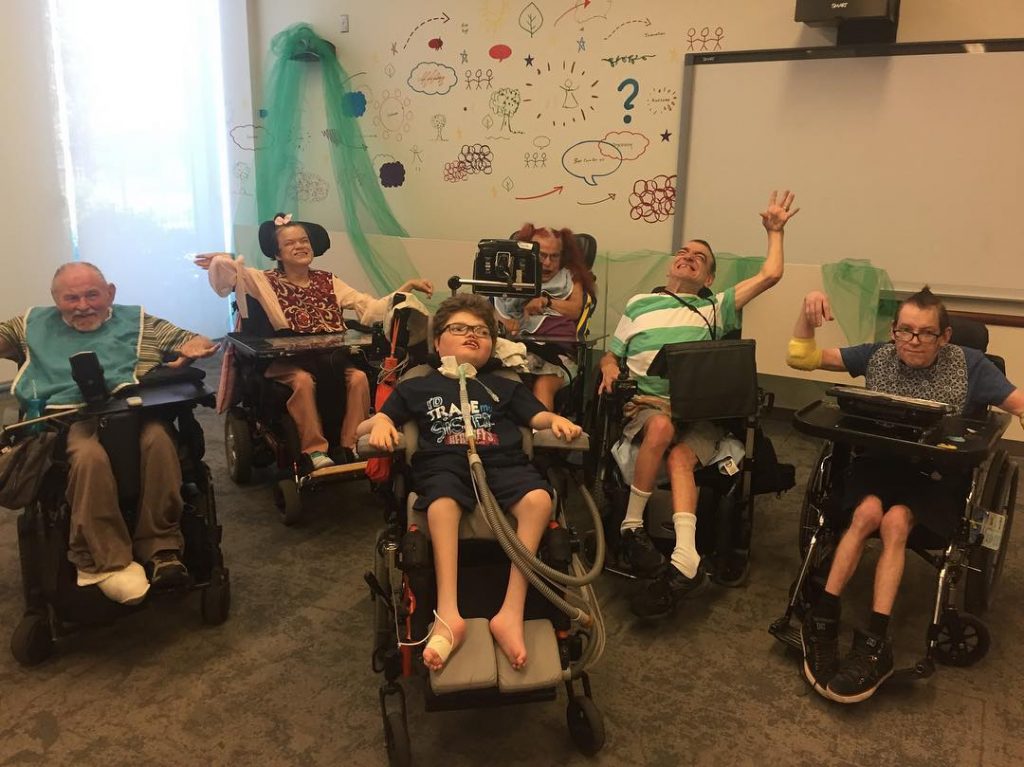 During our week long stay at the Huize Eyckerheyde Residence in Belgium, a residence for people with disabilities, we ran daily Envisioned Scenography workshops.  Residents created various worlds using fabric, and brought these to life. This ranged from people being ants in the grass of a summer garden party, looking up at the guests eating, while children played around a conservatory; to a church service, with all present, along a historic waterfront.

The final day was a Come to the Edge event for family and friends, complete with Belgium donuts made by the staff. Audience looked at photo cards as they pondered what they think is possible. They were invited to choose a fabric whose texture provided them with the power to come closer to the edge. After crossing the edge, the large group improvised a story around a town, with a church, garage, and nearby forest. A traveler arrived, and from the church on the hill, there was spotted a fire in the town, growing out of control. After greeting the stranger and finding shelter for him, the whole community came together to put out the fire with huge bundles of fabric water.

Here is an article written by Kris Daunoravicus, on one our Leadership team members from Niagara,  about the trip to Belgium 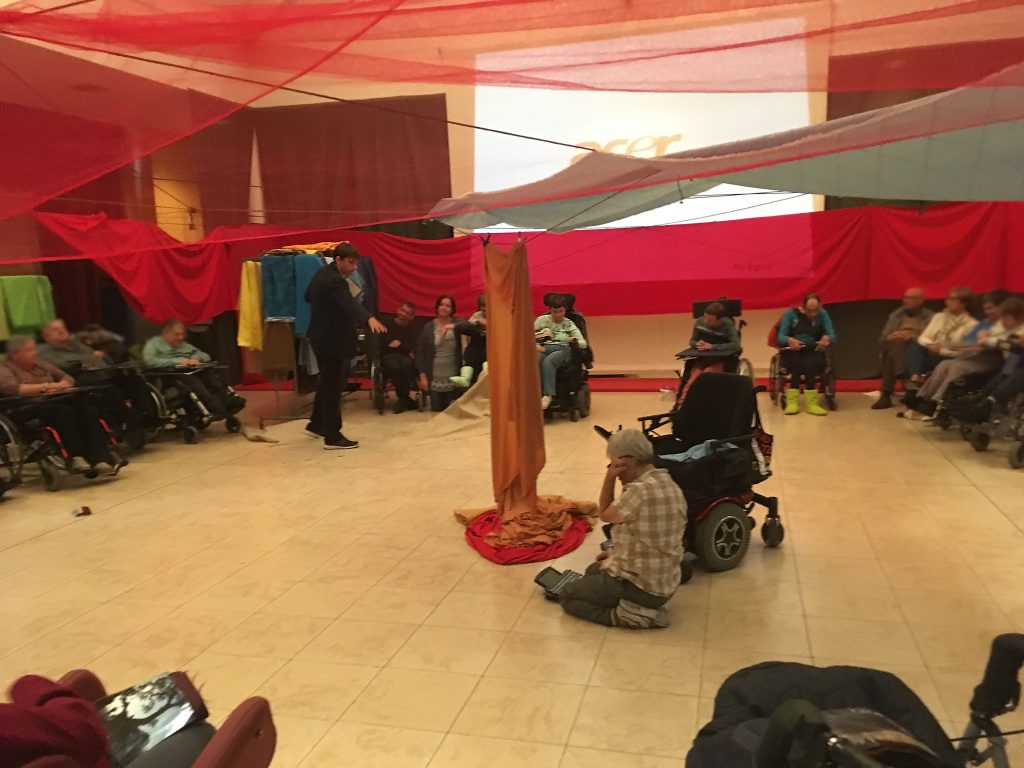 Run by Comalso ASBL, Belgian Center for Alternative and Augmentative Communication, we were thrilled to have a few residents, along with  Leadership team members Elaine Grover and Kris Daunoravicus as well as young three-year participant perform Come to the Edge. 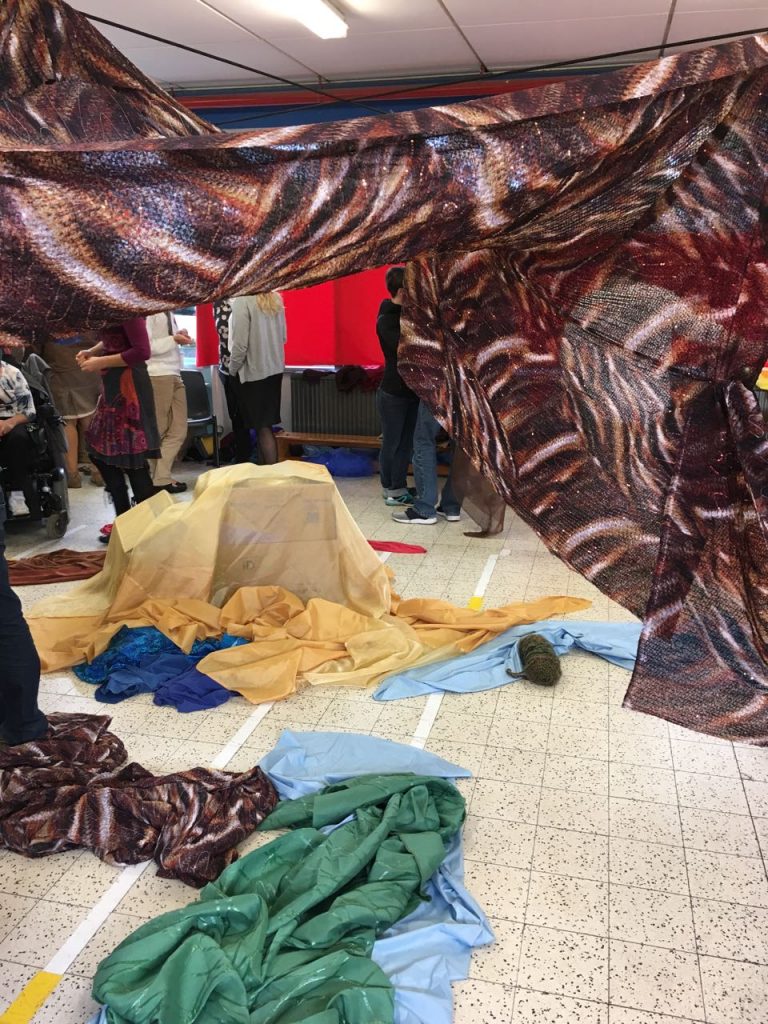 Premium Come to the Edge Event at Artscape Sandbox, Toronto

A mix of new participants and past experienced performers from Toronto and Hamilton, where each day was a unique day of improvisation. A world in Northern Ontario revealed itself.  Inside the woods on the side of a ravine, we discovered that there were some cottages. There were some comedic exchanges and some family tussles around burnt food on the stove. With all the food present, there was an incident with a bear, who appeared from the woods and got into the cabin. Once resolved, everyone had to make it to the local town, as they were now late to get on the weekly propeller plane. Overcoming some obstacles, they eventually managed to get onboard.  After a few starts the engines slowly fired up. The passengers boarded the plane and got comfortable in their seats, forming a line with 2 being strapped on the wings.  Everyone started to listen and hear the sound of the propellers as the engines gained speed – willing them to have enough power roaring through the engines. With our imagination spinning, the blocks were pulled away from the wheels. The plane slowly started rolling forward, along the runway, gaining speed, until the it started to take flight. Peacefully the plane glided over the ravine, continuing offstage and out of the world created.

Day two the group was in George Washington country, where the white house was under attack, and Donald Trump was in disguise.  It ended with a beautiful sunset, while some played the guitar, and we all listened to the beautiful music, as we watched the eastern seaboard burn to the ground.

Engaging Possibilities Workshop – A full day workshop where participants created 3 stories.  The group then improvised a final story, taking elements from the previous, in front of family and friends. Premier of documentary Leadership Team Goes on the Road at opening night film festival. 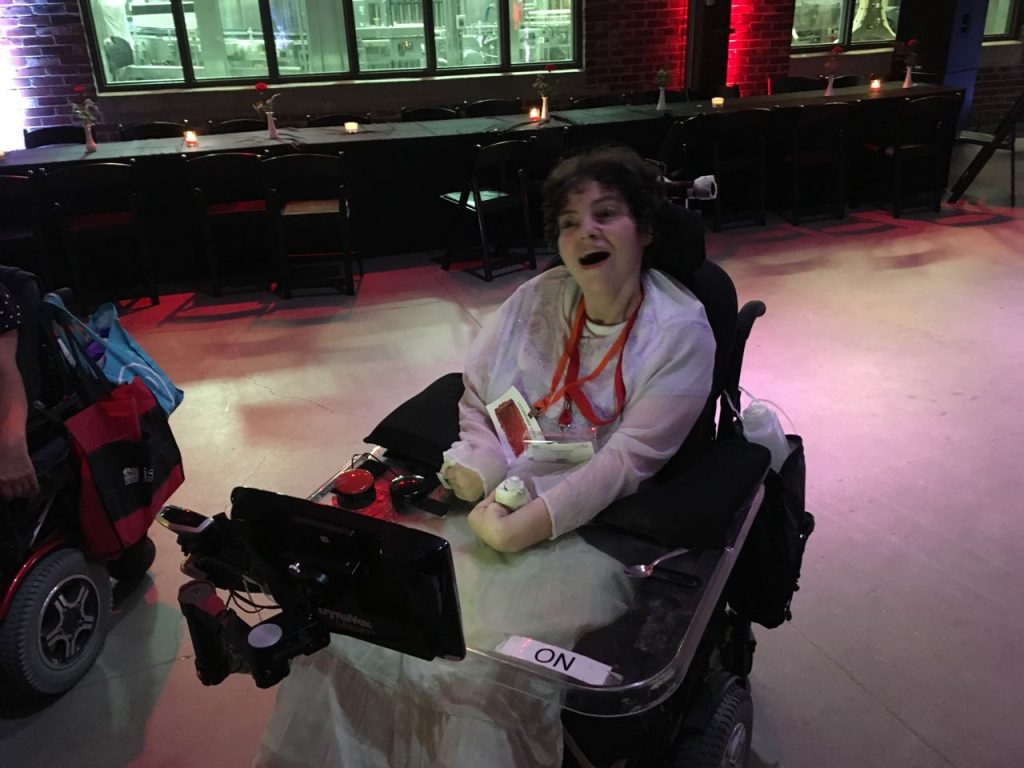 Presented an Open Studio Sharing for family and friends.  First time creating a story in front of an Audience.

These sessions were often physical and fluid as we explored movement approaches with Yvonne Ng. One memorable session was when our circle of energy create a ring joining all our ears in an expanding loop of red, which enveloped us in a dome of imaginary red. Where could this be? We sensed the light coming from the side of the room. In the sunlight, the arm of Willy Nelson came forth, and the red that was all around us was the blood in his arm, flowing through, as it hung out the window of a car driving through the desert, with the light shining through. We then all became red blood cells, and antibodies floating around and flowing through his arm enjoying the sunshine. We were the fire that day, but one without flames! 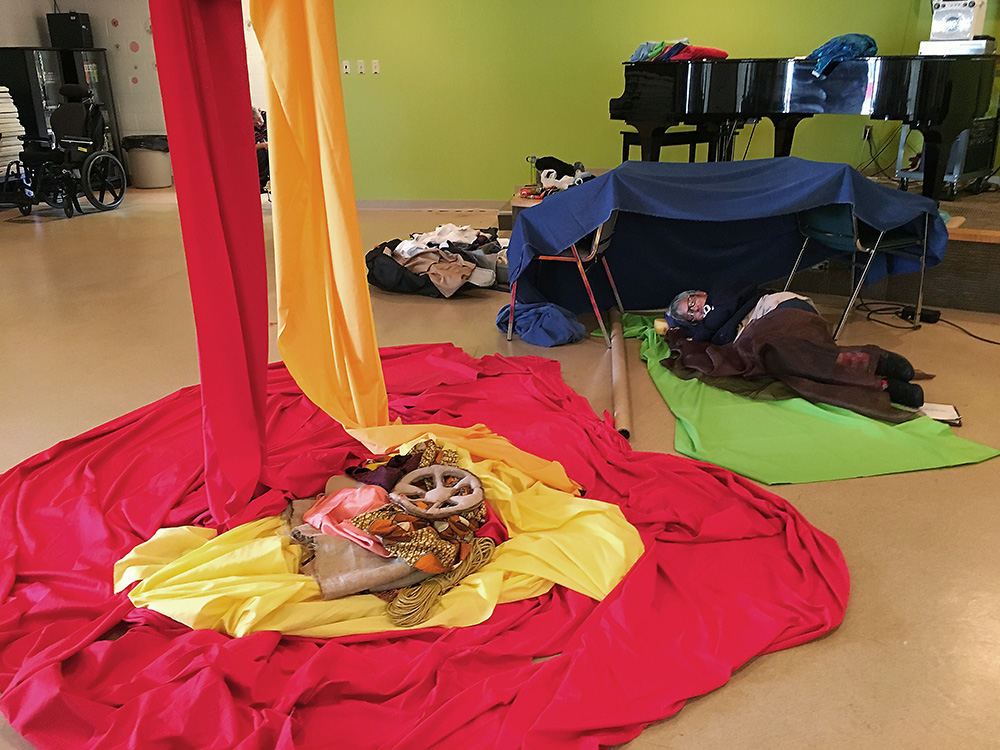 Our group was in a circle and we had imagined strings of energy going up from our heads to a point in the ceiling. We were sensing what this meant to us and where this could be, when Elaine said she found some thing, and said she had to rush off to a plane. What was it? She had visioned a rainbow coming down from the ceiling and she was at the bottom of it, with a pot of gold. She was escaping on a plane, but could not get it to start. Who’s plane? Where were we? Donald Trumps’ mansion (this was when he was just a real estate mogul). So quickly the mansion evolved, with security chasing down Elaine, and a fancy aquarium appearing, where more gold bars were stashed.

Later the police arrived at the mansion to see what was going on. Asking everyone to explain themselves, Paul Marshall messaged via AAC: “I know nothing, I have CP”, the police responded via AAC “Poor Child”. This brought fits of laughter from the whole group, and the story ended.

In fact Elaine was so tickled by that part, that she kept breaking out in laughter on the trip back to Toronto, after the workshop.

*Paul Marshall was an inspiration and one of the main reasons the Engaging Possibilities project in Hamilton began. He was our first Leadership Team member in Hamilton.  He passed away in 2016, and we miss his wonderfully generous presence, yet feel his energy in Hamilton every time we are there.

The Imagining Possibilities Participants created a story and made a video inspired from the Come to the Edge poem.  Premiered the Highland Lowland video at a Sharing for family and friends.

The group had worked on and created a story out of two scenes and made a video, inspired by Come to the Edge poem. This poem was later, further explored with the group during Imaging Possibilities sessions, along with the “Faith” poem, both which inspired the theme for the current Come to the Edge.

Back to COME TO THE EDGE Homepage